A unique property for sale. 4 bedroom villa surrounded by lemon and orange groves, swimming pool, established garden, parking, storage, roof terrace, courtyard and terraces. This property is a chance for a rural lifestyle in a peaceful setting. Excellent views of the mountains but close and a short drive to the local town shops or the large mall in Murcia via the E15 motorway.

Possible business opportunity as a cattery or kennels.

If you live in or have recently visited the Hondon Valley then you will have spotted the “Spaceship” house nestled in the pine forest towards and at the back of the La Montanosa Urb. (See the video below) in the Hondón Valley.

Well we recently had exclusive access to take new images and video of the property. ( visit our website to see the results : https://www.hondonvillas.net/property-details.php?pRef=689 ). The house was built around 2015 by a local sailor as an “eco” project and the design and construction has won an award.

Still unfinished it now needs a new owner to complete the interior and landscaping. The house has 3 bedrooms, all with ensuite showers, an indoor and outdoor pool and spectacular 360 views of the Hondon Valley.

The 450 m2 living space is over three floors: ground houses the entrance, garage and storage + the indoor pool … 1st floor is the main living areas such as lounge, dining, kitchen and bedrooms and the top floor is a circular leisure area with large solarium and viewing portal.

A truly amazing building but an acquired taste for the right person who wants something unique, quirky, tranquil and offers an abundance of building and design options over it’s 59K m2 plot.

#864: La Canalosa Cave House Conversion with 5 bedrooms & outdoor pool. : Guide Price €224,950
This well maintained cave house NEEDS to be seen to be fully appreciated … When you enter this completely renovated and modernised cave house you can see the owners worked heart and soul to make a near derelict dwelling into a 5 bedroom home, all to a very high standard.

Thank you to our 700 Facebook followers and 1.5 million website visitors.
We appreciate all your support for local businesses and welcome your Likes, Shares and Comments on our online channels such as Facebook, Twitter and our Blog.

Learn more about Hondón Villas…
We are into our 5th year as a member of the AIPP which sets out professional conduct and ethics for Real Estate agents globally.

We are the only Hondón agent to win the Business of the Year for the whole of the Costa Blanca.

We have two local offices in the main village plazas for Nieves and Frailes of the Hondón Valley. We are local and employ local people who know the area well.

We list and sell more houses than any other Hondón agent in the area. We lead and they try to follow.

Maureen Cook, the owner and director, has more professional experience in Real Estate and financial services than any other agent for miles. She is trained and been rewarded for sales targets and competency at a corporate level for over 30 years. She prides herself on being honest, fair and giving personal service. She lives and breathes property!

As real estate agents for the area we like to know the general trends and demographics of the Hondon Valley area. Well, the Spanish Institute of National Statistics (INE) and the Alicante government publishes annual figures on the population (births, deaths, marriages, migration, etc) of it’s towns and cities. E.G. this page is for Hondon de las Nieves published 29 Jan 2019.

http://documentacion.diputacionalicante.es/4hogares.asp?codigo=03077 or you can do your own reports on the www.ine.es website <

Figures here are based* on the Padron registrations, however experience suggests that the figures will not be wholly accurate (lower) as many of the foreign influx do not register or forget to re-register on the Padron, particularly when changing address.

So using the Hondón de las Nieves figures (rounded up/down for ease) as an example for 2018 we can see that Nieves village had nearly 2,500 people on their Padron. The Padron register suggests that the overall population has decreased a few % over the last 3 years but again is that due to inertia of signing the Padron, deaths or some migration away or maybe less influx of foreigners / Brexit? There are some clues in the figures but no reasons given.

Nationality and Birth: Nearly 1,600 people were born in Spain. Nieves has a 98% European population with about 900 as Extranjeros (foreigners). That number is down on other years. Why?

The figures of country split I looked at seem to omit the Dutch and Belguique. However, some working out would suggest that the Brits, Dutch and Belguique make up most of the foreign population in Nieves. But there are also a few German, French, Italians from the EU but about 40 Russian, Asian and South Americans amongst the population.

So Hondon de las Nieves is about 36% foreigners according to these recent stats. Which seems lower than most people would guess. What do you think?

Historically, the European influx was strongest after the 2008 crash! 2012/2013 shows the highest EU populas to number about 1,420. However that is a total but per year. e.g. in 2007 235 foreigners arrived but 2017 (ten years later) that was down to 79. It would appear we lost about 500 foreigners between then and 2018? From a real estate view point that would suggest there is lees of the property pie to serve which contrasts with our sales records over the last 5 years! We’ll try to puzzle that one out later.

Well now we know at least some basic population facts for Hondon de las Nieves… we’ll look at the Frailes figures soon. It’ll be interesting to compare Frailes with Nieves. Thank you for reading.

*NOTES: Any figures here are interpreted from the official INE stat’s and only for general interest, rounded up and not for re-publication or official in any way. it’s also worth noting that most of us regard the area as the Hondon Valley which includes many small towns and villages as a population so the Nieves stats cannot reflect the true picture of the valley or does it?

Video by Hondon Villas c2017
Enjoy the sunshine, the views and chill. This video is a short introduction to the glorious Hondon Valley inland to the Alicante Region, Costa Blanca South, Spain.

For decades they have grown an abundance of agricultural delights such as Grapes, Almonds and Olives (the main economy).

Hondon is surrounded by an expanse of stunning mountain views and traditional arid Spanish countryside. These excellent vistas are a delight in all seasons! Take a walk or drive through the country roads and you will just marvel at the changing light, shadows and picturesque skies.

The Hondon Valley is well known for its mild climate and pleasant summer breezes, which is very welcoming in those hot summer months when temperatures rarely fall below 30 degrees. The region enjoys sunshine in excess of 310 days per year, where the air is very clean and the pace of life slow. Hondon offers a very peaceful and stress free life.

Come take a look at the Valley of the Vines, drink the local wine under the bluest of skies and feel the warmth of the Spanish sun on your face … and you’re hooked! We were! We love it!

The province of Alicante is already seeing the first pink and white blossom of the almond trees on their farmland. The areas of Torrellano, in Elche, Hondón de las Nieves and Hondón de los Frailes, in the Medio Vinalopó, the districts of Marina Alta and Vega Baja are some of the points of the province in which you can already enjoy a beautiful landscape. 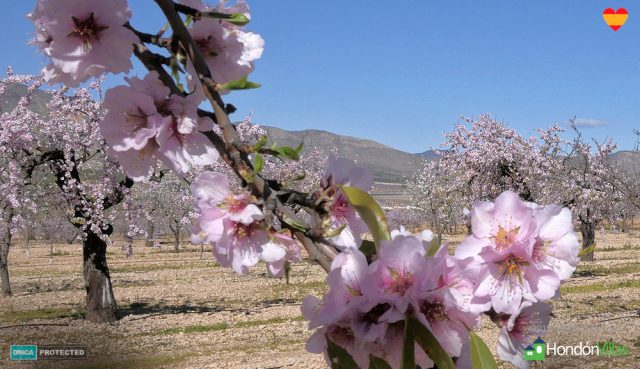 This flowering is earlier than usual in the region. It is common for the first petals and the first almond buds to begin appearing at the beginning of February.

The relatively high temperatures in recent weeks in the region, where in some points, such as Elche, have reached between 18 and 20 degrees! We’ve seen people sun bathing on the coast. However, the local farmers are a little worried that some almonds groves in the mountains may be exposed to possible frosts as the local temperature and inclement weather can be cold in the evenings and early mornings in January and Feburary. Lately the Hondon Valley is feeling 3-5 degrees first thing BRrrrrrr! But all is well by mid morning and a lunch al-fresco is a still a pleasant experience.

The village of Albatera is located in Vega Baja in Alicante province. Its population is barely 9,000 with many speaking Spanish and a little Catalan. Albatera is easily accessible from many Spanish towns and cities such as Alicante and Murcia.

Albatera came under Alicante province in the year 1833; it indulged in agriculture with River Segura assisting in its irrigation needs. However, pig farming flourished and became a strong contributor to Albatera’s economy. » Albatera Villas for Sale

Today, more industries have been established and these overshadowed many of the traditional economies. However, there are numerous irrigation channels and canals available to water the village’s agricultural plots. Hence, vegetable produce such as dates and lemons grow healthily.

Albatera’s history is rich with the many artefacts uncovered. These findings confirmed the village’s pre-historic civilizations that stretched back to 3rd century BC. The Romans came and set up the village’s irrigation channels to cultivate the land. The Arabs came during the 5th century until Alfonso X re-conquered Albatera in 1266.

There is an ancient 1729 parochial church at the plaza centre in honour of the local saint, Apostle Santiago. The plaza also houses the town hall and old casino.
Modernization

Albatera continued to flourish naturally with palm trees along its streets amidst whitewashed houses which are typical of Mediterranean villas in Albatera. There is plenty of beauty nature around Albatera.

Albatera has plenty of plains, wetlands, mountains and parks. The village’s park is called Park of Orchards; it spans 30,000 square meters and houses beautiful trees and plants in the midst a lake and a fountain. There are plenty of designated walking routes in and around Albatera.

Albatera has developed a modern resort for golf and sports such as shooting, tennis and riding. The village has also built many excellent Spanish schools as part of its modernization to education although the village folks maintain its steep traditions and good Spanish values.

Many fiestas and festivals continued to be celebrated as with most Spanish towns and villages on fiestas. One of the more exciting fiestas celebrated in Albatera is the July St. James festival. It is a combination of Moorish and Christian traditions which is celebrated over a week long where there are many brave young local men trying their hand in bull running and bull fighting.

Our IT people are telling us that our very own Hondon Villas websites have passed the 1.5 million visitors mark. INCREDIBLE to think we are such a small area and a real estate niche for inland Spain.

To think that when we arrived in Hondon, Spain 13 years ago, there was no information on the web about the Hondón Valley. (even Google hadn’t found it back then LOL!) Yet the area still retains the same Spanish charm and has changed little really. For sellers this is great news as the local economy thrives on property sales and a new influx of buyers looking for that typically tranquil Spanish country lifestyle.

What’s more… that figure does no include the 10,000’s of visitors to our international portals and marketing partners, like A Place in the Sun, Right Move, Kyero, Prime Location and more. WOW again!

So selling through Hondon Villas gets you plenty of exposure, maybe that’s one of the reasons why we sell more houses in the area than any other local agent!

Thank you from a VERY HAPPY TEAM!

Hondon Villas (an AIPP member) have already helped 100’s of people buy their DREAM HOME in the Hondon area. You will find that we are passionate about your property needs… Buy, sell or rent! 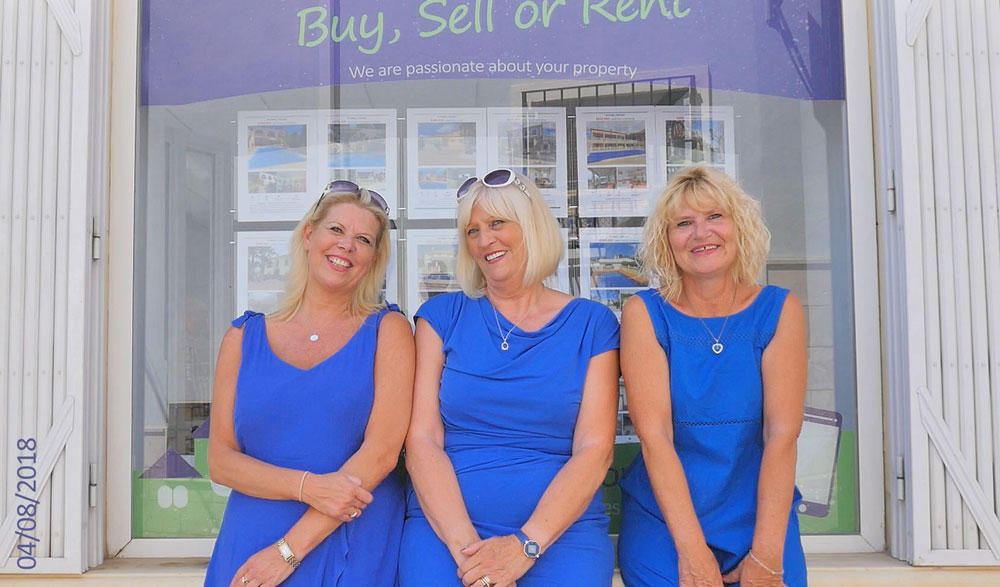