Nigel and Jane, from The Wirral (UK) have recently relocated to this beautiful area of Spain, the Hondon Valley to start a new life in the sun. 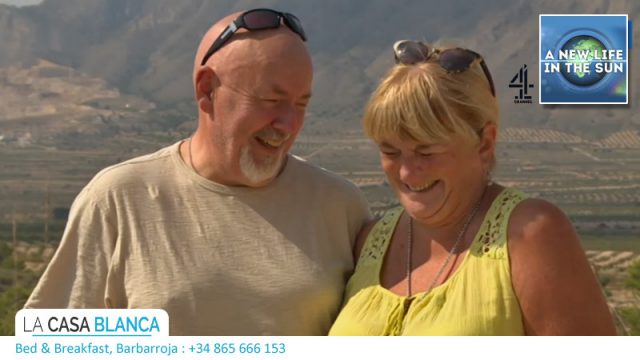 They bought their 5 bedroom B&B villa in Barbarroja through Hondon Villas in 2017 as a new challenge and change of life style.

The refurbishment of the property is to a high standard and now “La Casa Blanca” is open for business. It’s beautiful, welcoming and set in a wonderful location with views extraordinaire!

You can watch their “moving” story on the Channel 4 series “A New Life In The Sun”. Nigel and Jane are featured in Episode 11 on Monday 26th Feb’ 2018 at 4pm (or repeats). Or you might be able see them on All4 Catch-up. 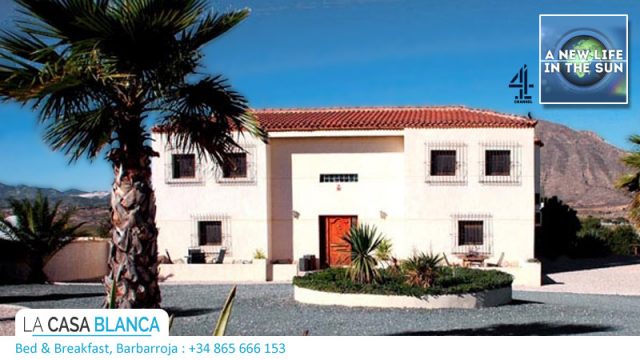 Centred in the popular Spanish village of Hondon de las Nieves plaza. It can accommodate more than 150 covers with seating inside and out.

More property for the Hondon Valley and areas on our Hondon Villas website:
LINK : http://www.hondonvillas.net/ 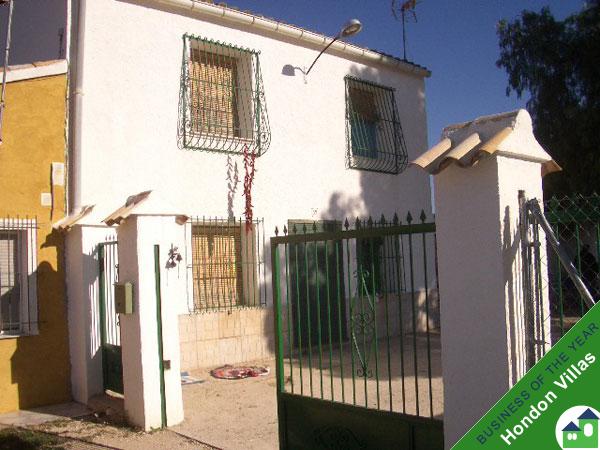 Hondón Villas pleased to bring onto the market for sale this rustic two-storey finca in need of some renovation in Algueña.

The property comprises of a fitted kitchen and a lounge with feature fireplace. There are 4 bedrooms and one family bathroom with a shower bath.

Outside there is a horse stable with a paddock and a storage room. Large pine trees offer shade

The fully fenced plot of 1500 sqm offers space for the installation of a pool. 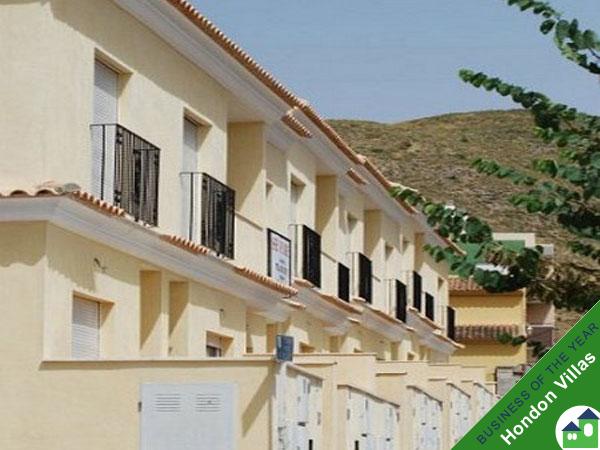 Hondón Villas are delighted to bring onto the market for sale these brand new town houses, located on the edge of the village and within walking distance of all amenities.

On the ground floor there is a light and spacious lounge/diner, well fitted kitchen, utility area and fully tiled shower room.

On the first floor there are 2 double bedrooms, and a fully tiled family bathroom. The master bedroom has fitted wardrobes and French doors leading onto the balcony.

Upstairs is a private rooftop solarium with beautiful mountain views!

Bargain Priced! Must be viewed. 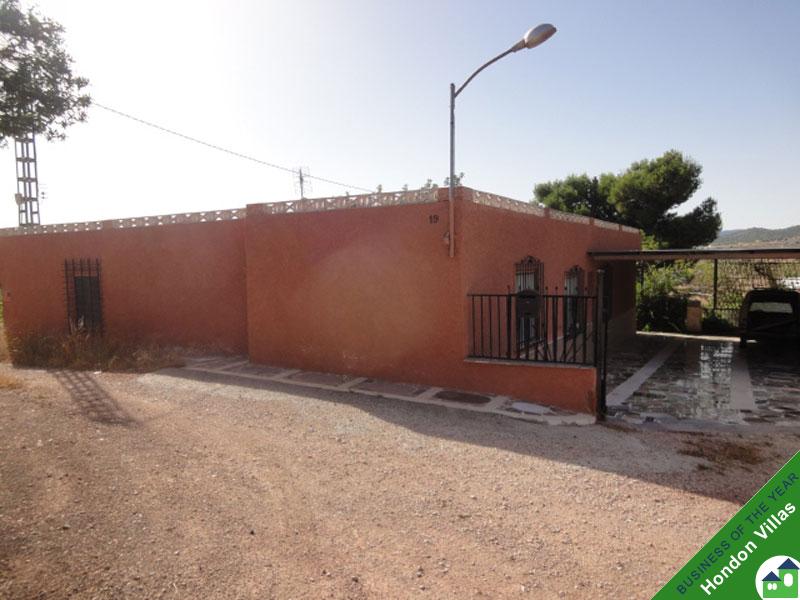 Hondon Villas are pleased to bring onto the market for sale this delightful 4 bedroom 2 bathroom country house just outside the busy village of La Romana and only a short drive away from Monovar.

The country house comprises of 4 bedrooms, 2 bathrooms, 2 lounge/diner with fire place and a fully fitted kitchen.

Added onto this, there is a cave house with a 300m2 internal build that comprises of 3 bedrooms, 1 bathroom, a lounge/diner and also a kitchen. In this part of the property we can also find two storage areas.

Outside there is a BBQ area, water deposit and a beautifully landscaped garden.

A must view property!!!!

A designer villa for sale, in the Hondón de las Nieves campo. 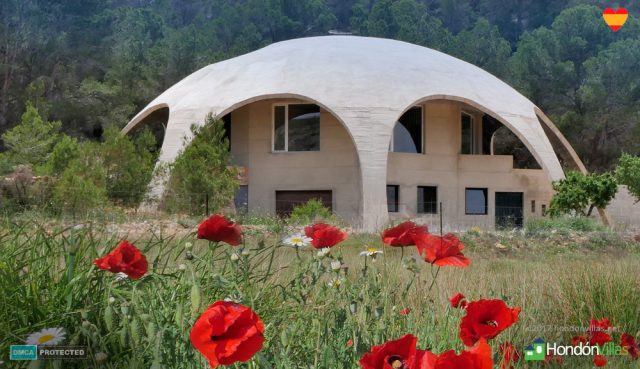 As you drive along the main Hondon Valley road (CV845 )  you will see , not too far from the La Montanosa Urb. towards the mountain backdrop is a unique style detached villa with a  “canopy” style roof.

This villa has 360 degree mountain views and is built over 3 levels.

Hondón Villas are delighted to bring onto the market for sale this unique designed detached villa which won a Design Award in Architecture 2014. The villa is sat in a quiet location surrounded by 360 degree mountain views. The villa is only 5 minutes drive to both the local villages of Hondón de los Frailes and Hondón de las Nieves. 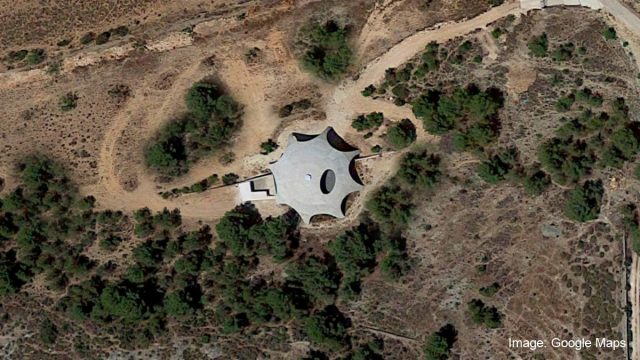 The villa is set upon 3 levels, the ground floor has a garage and a workshop. And has extras such as hot/cold tubing embedded in the floor as an initial energy recovering for heating.

The first floor comprises of a fitted kitchen, lounge, 3 bedrooms and a bathroom. There is a terrace and room where the swimming pool will be installed. Upstairs on the top floor is a leisure area with a terrace which is south facing.

A very modern build and must be viewed to be fully appreciated. 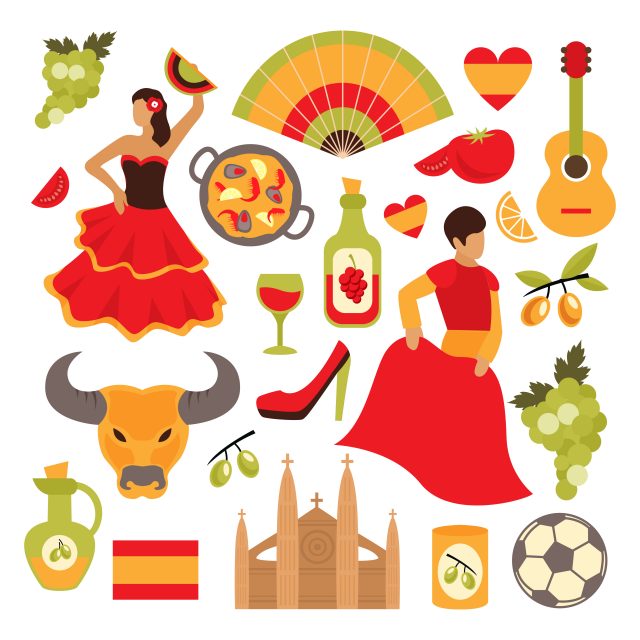 Imagine that the Spanish-speaking world was a single country, called Hispanidad. It covers a territory perhaps one-and-a-half times the size of China. Its population is nearly 500m, making it the world’s third most populous country, behind China and India.

(See below for course ideas)

Among these people, the number of native Spanish-speakers is rising towards 400m; as a mother tongue, only Mandarin Chinese is bigger. Hispanidad also has a rich literature, from Cervantes to Gabriel García Márquez, that is best enjoyed in the original. And you really should see an Almodóvar film without subtitles. Only English and Chinese are more widely used on the internet than Spanish.

So if you are in business, into the arts or just want to join la conversación, the sheer size of Hispanidad is a powerful reason to learn Spanish. But Hispanidad is not a single country. The fact that it spreads across the Americas, Spain and even parts of Africa and Asia makes the case for Spanish stronger still.

After English, it is the most used international language. For tourists it eases and enriches travel in the 20-plus countries where Spanish is a main language (though some may prefer to skip Equatorial Guinea). Students have an enviable choice of stimulating places to hone their Spanish skills, from Venezuela to Argentina to Spain itself.

Not forgetting the United States, the country with the second-largest number of Spanish-speakers (about 50 million and rising) after Mexico. Latinos are growing in influence culturally, commercially and politically. Nowadays, would-be presidents make sure to advertise in Spanish: Soy Mitt Romney y apruebo este mensaje.

Even for those with no political ambitions, there is another compelling reason to pick Spanish as your second language: it’s easy (certainly compared with, say, Mandarin). And once you’ve got Spanish, you’re half-way to Italian, French and Portuguese too.

Learn Spanish? ¡Cómo no!, as they say in Hispanidad.

Here in Hondon, there are many private teachers, shared classes and the Townhalls in the area will from time-to-time offer free courses. if you want to learn remotely online, a quick “Google” will find you many courses (free, cheap and full certified courses). There are also interactive mobile Apps such as DuoLingo (free) to get you started. Rosetta Stone make a DVD-ROM course.

Or you cold plump for the old fashioned “buy a book” to learn. Which ever is best for you, we highly recommend you learn some Spanish as it will help you integrate more, understand the rules and medical and of course engage with the many friendly locals in the Hondon Valley. 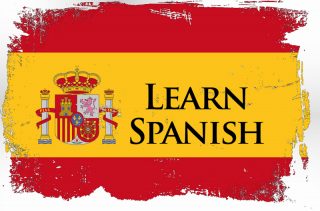 Lane Green suggests:
Duolingo is a free all-in-one package, and will get you going. If ready to commit, Babel is a cheap and high-quality subscription that helpfully explains grammar in the teaching. Rosetta Stone, much marketed, now offers a competitive subscription price, but its approach of teaching through pictures, without ever using the learner’s native language, is best kept for easy European languages. Memrise, with many free courses, is brilliant for vocabulary, and even some elements of grammar. It is based on the science of spaced repetition: words are re-introduced at lengthening intervals in flashcard-style exercises. When you get one wrong, the length between repetitions is shortened again, before gradually lengthening. (If you can find them, use the Memrise courses that have audio: when you hear and see the word simultaneously, each reinforces the other – and the audio will train you out of pronouncing the words as though they were English much faster.) 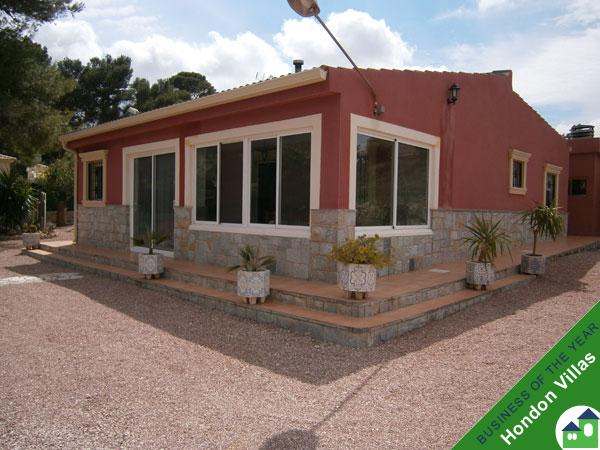 Hondon Villas are pleased to bring onto the market for sale this lovely detached villa in Hondon de las Nieves.

The villa is situated in Bayon within walking distance to the village, close to all amenities such as schools, shops, bars and restraunts.

The property comprises of a well presented fitted kitchen, a lounge/dining area that benefits from a wood burner, 3 bedrooms and a family bathroom. To the front of the house is a glazed in Naya which provides an extra room which is bright and airy.

Exterior is a small private pool surrounded by mature gardens and over looking stunning mountain views.