KYERO SAYS: Historically low rates are enabling extremely cheap mortgages to be offered by lenders. Flexible term interest rates are currently being advertised at less than 1.5 percent above the Euribor, and the latest Euribor rate has just been announced, with March’s figure being only 0.2 percent.

With a more pro-active attitude from banks and the surplus of unsold property gradually reducing, the number of new mortgages issued this year is nearly 20 percent higher than last year and has maintained 8 months of consecutive growth.

The vast majority of Spanish mortgages (90 percent) are agreed on flexible rates, based on the Euribor, and although these rates are unlikely to rise too much in the foreseeable future, the Euribor went as high as 5.39 percent in mid-2008.

Analysts are viewing the mortgage figures extremely favourably, with one of the ‘big three’ credit agencies (Fitch) marking an end to house price falls in Spain and a return to slow but gradual growth.

According to a recent report (February 2015) the rental price of Spanish Property has shown an average increase of 1.3%.
» Long Term Rentals in the Hondon Valley

The average price of housing for rent now costs on average €6.85 per m2, per month, according to the most recent data published by property portal, fotocasa.es. The property portal stated: “In recent months we have gone from registering declines in rental prices throughout almost the whole of the country, to registering monthly increases in most regions and in more than half of the provinces. This demonstrates that rental prices in Spain are tending towards stabilisation.”

The Basque Country remains the most expensive region of Spain to rent property (30% above average) followed by Catalonia and Madrid. The best value region would be Extremadura and Castilla-La Mancha.

What does the latest UK budget and new UK Pension / Annuity Rules mean for buyers / sellers of foreign property? Here’s an interesting post-budget reaction from Opps about cashing in pensions to invest in property. Good or Bad?

In a boost to the UK housing market, Chancellor George Osborne announced that Help to Buy ISAs will be introduced to help first-time buyers save for a deposit. For every £200 they save, the government will top it up with £50.

But were no other major announcements in the Budget directly affecting the housing sector, apart from confirmation of plans for 20 new housing zones.

Turning to the economy, Mr Osborne says the squeeze on public spending will end earlier than planned due to stronger growth and low inflation, as the Office for Budget revised its growth forecast for 2015 up 0.1% to 2.5% and for 2016 from 2.2% to 2.3%.

Focusing on pensions, Mr Osborne confirmed the Government will give five million pensioners increased access to their savings.

“In a budget taking the country from ‘austerity to prosperity’ pension savers need to ensure they don’t put themselves into ‘austerity’ with reforms announced to extend pension access to Annuity-holders.

“It is a sad indictment of the industry, but we are likely to see a rise of the get-rich-quick brigade entering the property market, to wax lyrical about the advantages of investing in property, as an alternative way to invest liberated pension pots… read more on Opps

Father’s day is known as ‘EI dia del padre’ in Spanish. It is celebrated on the 19th of March and falls on St. Joseph’s day, since the Catholic Church holds a significant influence on its culture. This day is to commemorate the life of the patron saint of carpenters; Joseph, who set an example of fatherhood. In some parts of Spain, like Valencia, there’s a grand celebration on St. Joseph’s day and is called “Las Fallas”. Father’s day, until very recently, was a non-working holiday in Spain.

This annual holiday is considered very important in Spain, as it helps acknowledge the contribution of fathers to individual families and to the society at large. This is a day to honor and thank all the father figures. The entire family gets together and enjoys a big feast and exchanges gifts. Children in Spain get busy in the preparations a week before EI Dia del Padre. They make crafts, gifts and prepare several activities for their fathers. The grown up children who are working or staying away from their home, make it a point to return back home on this day. In Spain people give family the paramount position.
>> http://www.loveyoufather.com/around-the-world/spain.html 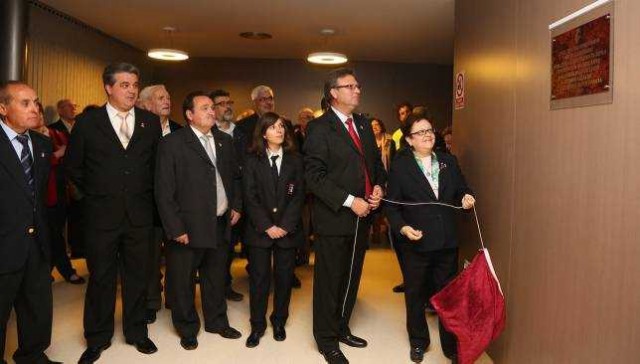 The modern building that houses the theatre and cultural center is 407 square meters, consists of a main access via the street through glazed entrance doors. The floor of the building is divided into two sections; one consisting of access, toilets and storage and the other with stalls and scenery.

Also, the Frailes Council are currently implementing improvement works to several streets of Frailes with an investment of over 306,576 euros. Within this aid package also includes the supply of electric power to the Auditorium.

Kyero.com Director, Martin Dell, said “Foreign interest in Spain has been slowly creeping up for a few years, but in the last 12 months we have seen a massive resurgence of purchasers from overseas”.

Last year, foreign buyers were already making up the largest proportion of all home purchases in Spain in history. With property price indices starting to rise and building permits increasing for the first time since 2007, the results are already indicating another record breaking year.

“Not only have prices in Spain bottomed out so far as residential property has concerned, but for British buyers in particular now is the time to buy due to the fantastic exchange rate,” concluded Martin.

According to BBVA Research, Spain’s economic growth prospects and more favourable financing conditions will lead to a new increase in housing sales in 2015.

They have estimated that the return to economic growth, the recovery of the labour market – with the creation of some 425,000 jobs – and improved financing conditions, have encouraged the return of consumer confidence and, as a result, the growth in home sales.

In March, the FT website also reported that “Spanish housing prices rise at fastest rate in 6 years” since the start of the country’s financial crisis, fuelled by a broader economic recovery and increased availability of credit.

They go on to say “Spain has started to recover, emerging as one of the fastest growing economies in Europe. Mariano Rajoy, Spain’s prime minister, last month raised the official government forecast for economic growth this year from 2 per cent to 2.4 per cent.”

Newly built homes in particular seem to experiencing an upsurge in prices, with figures in the second quarter of 2014 increasing by 1.9 percent. Although excellent news, this recovery will have to continue for some time before house prices regain a more than 30 per cent loss in value during the recent economic crisis. » New Build and Spanish Resale Villas in Hondon

Looking to the future it hoped that a sustained increase in housing prices will boost Spain´s struggling construction industry.