It was awarded the UNESCO Intangible Cultural Heritage of Humanity designation in 2010 because it is much more than just healthy food, and because it has been consolidated as culture that promotes social interaction, respect for the land and biodiversity, and preservation of traditional and craft activities connected with agriculture and fishing.

In general, it is high in vegetables, fruits, legumes, nuts, beans, cereals, grains, fish, and unsaturated fats such as olive oil. It usually includes a low intake of meat and dairy foods and a lot of seasoning and spices. It is usually consumed with wine, water or infusions. The UNESCO mentions Soria, in Castile-León, as a clear example of a city that is committed to the Mediterranean diet, even though it can be enjoyed all over Spain.

The Food Is Really Fresh

You won’t need to roam the frozen food aisles for the Med diet…. like the locals hit the bi-weekly markets for fresh seasonal food and keep it simple & mouth-watering such as salads, soups and stews. The Med diet in general is no-fuss and family food. You can build a yummy salad from market garden spinach, spring onions, asparagus, cucumbers, and tomatoes. Add classic Med’ ingredients like olives and local cheeses or cured hams or make a fresh cold soup such as Gazpacho. 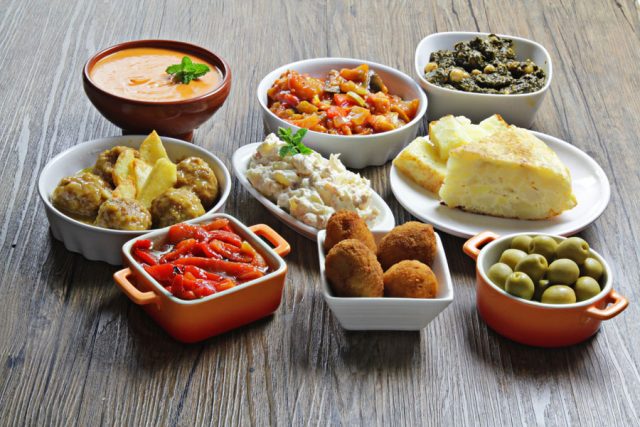 The Greeks have meze, Spain has tapas! We love ’em! A tapa is an appetizer or snack in Spanish cuisine and translates to small portion of food usually to accompany a drink in a bar. You’ll find dedicated tapas bars all over Spain but Andalucia is famous for them. Tapas may be cold or hot. In some bars and restaurants in Spain, tapas have evolved into a more sophisticated cuisine. Many tapas are often combined to make a full meal. Some of our favourites are Tortilla, Serrano Ham, Manchego cheese, grilled asparagus, chorizo in red wine, olives, Pinchos (small open sandwiches) and of course Patatas Bravos! And the garlic dip Ali-Oli served with fresh bread is pretty much the law in this area. 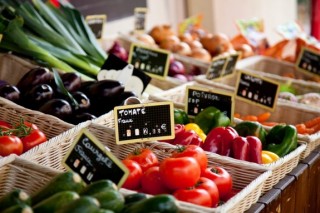 You cannot have a Med Diet without Olive oil, a good green virgin type is a must. It’s healthy than other oils or fats.

It is extracted from olives, the fruit of the olive tree which, together with wheat and vines, makes up the triad of Mediterranean plants.

The oil composition of this fruit varies, depending on the type of olive, the soil, the climate and how it is grown. Olives are composed of about 30% oil. All olives can produce excellent virgin oils, each with their particular characteristics. They need to be picked carefully and they must be processed the same day they are harvested. Olive oil has exceptional properties for human health and its consumption is essential in most of the culinary creations made nowadays in Mediterranean countries.

Saffron is a deeply rooted condiment, both economically and culturally, in many parts od Spain, traditionally used in Paella. It should not be considered just another agricultural product, rather part of the historic and cultural patrimony of the region that must be protected and preserved. It has enjoyed a Protected Denomination of Origin since 17 March 2001.

This plant was introduced to Spain by the Arabs. Cultivation has been maintained ever since its arrival to the region of La Mancha. Saffron is obtained from the dried stigmas of the saffron crocus: Crocus sativus. It is used as a condiment, providing dishes with a characteristic orange colour and slightly bitter taste, as well as an exotic aroma. Saffron from La Mancha under the Denomination of Origin must always be saffron from the current harvest, since it loses quality over the years.

The Spices Are Delicious

Whilst Med food is not “hot” like asian food they do use simple herbs and spices such as bay leaves, cilantro ( coriander ), parsley, rosemary, garlic, pepper and cinnamon to add so much flavour… rarely will you need to reach for the salt shaker. Some have health benefits, too. Coriander and rosemary, for example, have disease-fighting antioxidants and nutrients.

You Can Have Wine

A glass of vino with meals is common in many Mediterranean countries and Spain is no exception (and so cheap!), where dining is often leisurely and social. Some studies suggest that for some people, up to one glass a day for women and two for men may be good for your heart! And despite the wine snobs aversion to Spanish wine, there is excellent quality and variety to choose from and priced a fraction of French or Australian wines.