We hope you all have a great break and make the most of your time off with friends and family over the spring time break.We have to legally close for the national bank holidays but we’ll be out and about in the Hondon area and you can call our mobile number or email us if it is urgent. 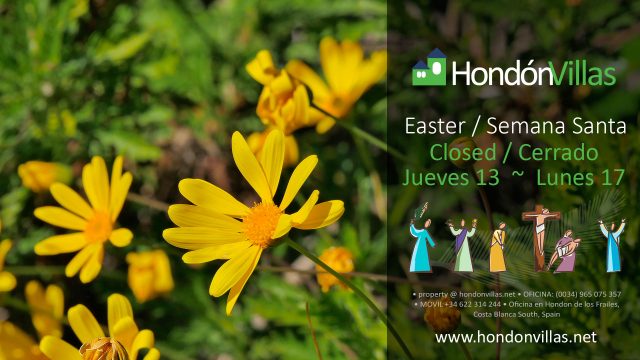 Easter is a very important festival in Spain for obvious religious reasons. The event is well over a week, starting with Palm Sunday before the Good Friday and of course that whole weekend sees Spanish families get together to celebrate and worship.

» Find out What’s On Near You for Easter

So, Easter Eggs are a rarity here, but they do have chocolate treats along with the more serious church events. If you get a chance to attend a local parade or ceremony you should do, as the Spanish love to dress up (very glamorous) for Easter and the children are a big part of the festivities too.

» Learn About Semana Santa in Spain

Wikipedia says: Spain is known especially for its Holy Week traditions or Semana Santa. The celebration of Holy Week regarding popular piety relies almost exclusively on the processions of the brotherhoods or fraternities.

These associations have their origins in the Middle Age, but a number of them were created during the Baroque Period, inspired by the Counterreformation and also during the 20th and 21st centuries. The membership is usually open to any Catholic person and family tradition is an important element to become a member or “brother” (hermano).  Some major differences between Spanish regions are noticeable in this event: Holy Week sees its most glamorous celebrations in the region of Andalusia, particularly in Málaga and Seville, while those of Castile and Leon see the more sombre and solemn processions, typified by Semana Santa at Zamora and Valladolid. This is a religious holiday.

A common feature in Spain is the almost general usage of the nazareno or penitential robe for some of the participants in the processions. This garment consists in a tunic, a hood with conical tip (capirote) used to conceal the face of the wearer, and sometimes a cloak. The exact colors and forms of these robes depend on the particular procession. The robes were widely used in the medieval period for penitents, who could demonstrate their penance while still masking their identity. These nazarenos carry processional candles or rough-hewn wooden crosses, may walk the city streets barefoot, and, in some places may carry shackles and chains on their feet as penance. In some areas, sections of the participants wear dress freely inspired by the uniforms of the Roman Legion.

The other common feature is that every brotherhood carries magnificent “Pasos” or floats with sculptures that depict different scenes from the gospels related to the Passion of Christ or the Sorrows of Virgin Mary. Many of these floats are art pieces created by Spanish artists such as Gregorio Fernandez, Juan de Mesa, Martínez Montañés or Mariano Benlliure. Brotherhoods have owned and preserved these “pasos” for centuries in some cases. Usually, the “pasos” are accompanied by Marching bands performing “Marchas procesionales” a specific type of compositions, devoted to the images and fraternities.