As an established estate agent in Spain, Hondon Villas are always keen to use new technology if it helps present and sell our clients houses, improve our real estate services and help speed up our work flow.  [ Published on: 29 May 2017 * updates Jan 2018 below]

We did consult an experienced lawyer on the use of drones ( see below). She advised us that in a nutshell: it seems clear that the laws in Spain (as we write in 2016) it is not advisable to fly drones for commercial purposes or anywhere over urban or populated areas, particularly government owned or where security and privacy is paramount. To do so can incur massive fines. 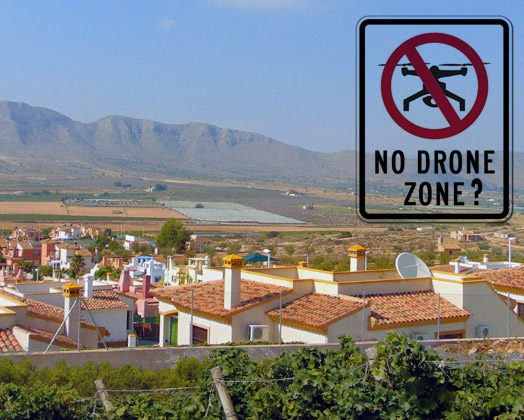 Background: Well we saw some excellent promo’ footage of luxury properties in places like Marbella, Florida, UAE, etc. After seeing these we thought that for some luxury properties with a global appeal, aerial photographs or video would help the prospective buyer in their potential property choices.

But are they of use in Hondon? Does the law allow us? Well,  about two years ago we at Hondon Villas researched the use of Drones for aerial photography as we were unsure of the appetite for such a service, the cost to do it or even if it would help or hinder or business.

Of course it is early days for such technology and because of mass production and a relatively low price entry level, unmanned remote aircraft are now in abundance. Rightly or wrongly, many people already have them. But as a result, there are now numerous reports of some pilots abusing their use with no regard for others. In short aerial photography has become a “wild west”  situation.

So it turns out that the use of retail drones, particularly over private land, government buildings, urban land & housing estates is contentious across the globe. Indeed there are few places you can fly them legally unless the drone and pilot register and get permissions, particularly for commercial purposes.

Indeed, a local Hondon Valley real estate agent has already used a drone to film the area and some of our own clients have expressed to us the dismay they have that their home, location and land layout have been exposed without permission. Did the agent get permission? Well the law would suggest it would be necessary as it’s used for commercial advertising (branded with a logo) and the flights are over populated urban land and critically within the Alicante airport flight paths.

So whilst the use of drones in Real Estate seems a good idea, it is not as straight forward to just buy a drone and willy nilly film whatever you want – even though many agents here are already doing so!

Indeed, it is risky in many ways. The Spanish government has collected almost €2 million from drone fines alone since 2015 as they actively looked for breaches of the law. There is a total ban on drones in around the Balearic Islands for instance.

Pro’ versions of drones with high-end UHD cameras can be costly and difficult to fly. So the EU & USA in general are keen to legislate on their use and limit the areas they can be used. The reasons are mainly on safety, privacy and security grounds. After all a falling drone could damage property or hurt someone and people are quite precious about their privacy and can feel spied on.

We think in general, the above reasons for laws on drones have some merit in this uncertain world. And of course many people will and do misuse this new technology for criminal or dubious activities.

So Drone laws make sense to us. And whilst the main manufacturers and retailers pile drones high on shop shelves and sell them to anyone, there are actual laws to govern their purchase, registration, use and permissions. It can be a “red-tape” paper chase, especially in Spain. ( Royal Decree-Law 8/2014 on Air Navigation and Law 18/2014, of 15 October )

We certainly advocate laws on grounds of privacy in built-up areas. E.G. In Spain a property vendor may list their house with many agents, so do we really want those many agents “droning” over properties on a regular basis? We don’t think so. We get the impression that local residents would take a dim view of regular “spies in the skies“.

So, after a lot of questions to legal eagles, near-by flying clubs and asking people in the Hondon Valley, plus taking into account the price of a pro drone purchase, accessory costs and training, we at Hondon Villas concluded that currently (2016) using drones in Real Estate might not be the way to go until the laws are changed over these temporary 2014 ones in place now.

So, yes we’d love to offer the service to those that want it but as the Hondon areas are predominantly an urban sprawl we think that many locals would soon complain about noise, nuisance and security issues. In short, we respect the law and our prospective clients privacy and safety. We can’t rule it out for the future of course so we will be keeping an eye on any developments and laws.

Our SOLICITOR spelt out the current stance in Spain:

The matter of private or commercial “drones” is regulated in Royal Decree-Law 8/2014 on Air Navigation and Law 18/2014, of 15 October, approving urgent measures for growth, competitiveness and efficiency.

That provision primarily regulates identification, features, possible uses, operating conditions, enabled airspace, security, accreditation of pilots and authorization certificates. An important remark is the obligation to obtain the necessary authorizations and make the flights always during daylight, in good visual meteorological conditions and out of congested areas of cities, habituated towns or settlements and outdoors gatherings of people.

On that regard, State Aviation Safety Agency showed, in his note of April 7, 2014, the following statement: “is not allowed, and has never been, the use of aircraft piloted by remote control with commercial or professional purposes “.

As a final note, it is important to know that this regulatory framework is provisional and will apply until the approval of the regulatory rules laid down in Final Provision second, second paragraph, of the Act. So, it is possible that operating drones in Spain in urban areas and for commercial purposes can be allowed despite that is not what Law has permitted so far.

The Spanish RPAS regulation (Ley 18/2014) is only applicable to flights for commercial purposes and all professional activities.

But for recreational use (hobby) you should comply with the provisions in Spanish Law “Real Decreto 552/2014” (rules of the air), article 15, that allows RPAS flight at low altitude “as long as they do not involve any risk or harm to people or properties on surface”

So in particular you should:
– operate at Visual Line Of Sight (VLOS) and below 120m height.
– not fly in urban areas and over buildings and people. Overfly of populated areas and crowds is not allowed.
– not fly in controlled airspace (near airports) and avoid flying in areas where flights are conducted at low altitude with manned aircrafts.
– not fly at night or in bad weather conditions.
– please ask your local authorities prior to flying.
– other special restrictions may apply, for example in some special areas like Natural Parks and Biosphere Reserves.

Spain has recently changed the laws on Drone usage for both commercial and hobby use. They are still quite strict however. In a nutshell, the pilot has a legal responsibility to fly with consideration of the safety, security and privacy of people and buildings, including him/her self. Commercial or paid drone pilots must be registered, insured, medically certified as fit and trained to use a drone (currently about 4 day course and an exam). Certain flights, locations and areas require authority from the AESA (Spain’s state aeronautic organisation). There are distance rules for built-up areas and “sensitive buildings” like hospitals, airports, schools and urbanisations.